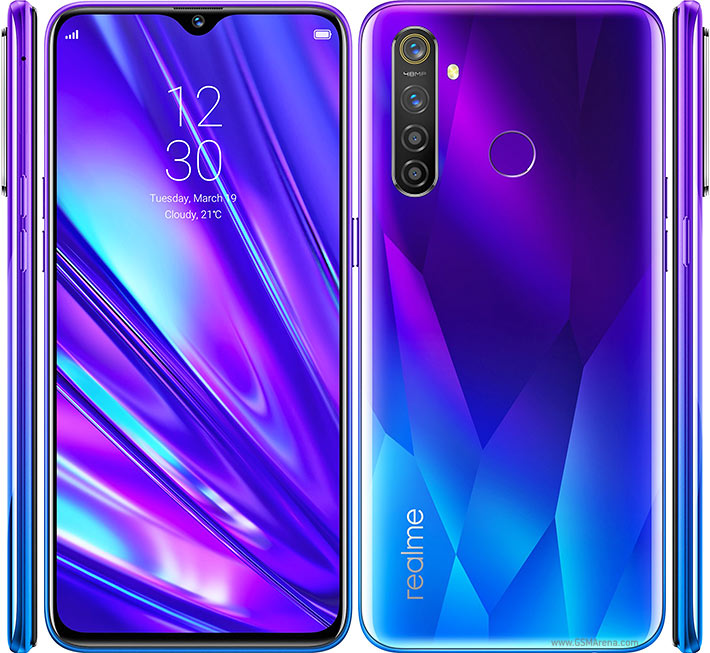 The Realme 5 Pro comes with a large LCD screen of 6.3″ inches with an ultra-high resolution of 1080 x 2340 pixels. In addition, the screen peaks at 450 nitts which is a huge advantage in high-lighting intensity conditions. The front panel shows off a smooth waterdrop notch with slender bezels on every side. Additionally, the Realme 5 Pro offers maximum frontal protection via Corning Gorilla Glass 3+.

On the other hand, the back panel is coated in an intricate triangular design that leaves you lost in thought just thinking how it was pulled off. It’s eye-catching and leaves an in-depth impression at first sight. The linear quad-camera platform is located at the top left of the device and it sits quite nicely with the fingerprint sensor which is centralized on the back as well. In addition, the earpiece is located on the top of the display, the bottom however is home to the USB-C port, the 3.5mm jack, and the loudspeaker grille. We also get a triple card slot on the top left side with the volume buttons present as well. Finally, the power button stands alone on the right side of the phone.

Being the company’s first Quad-camera, Realme brought their entire photography arsenal to the table. As a result, the quad-camera setup features a 48MP primary camera with ultrawide, depth, macro modules to assist shooting and bring out the best in every photo. The main camera is in fact the popular 48MP Quad Bayer IMX 586 sensor produced by Sony, this camera is optimized for both daylight shooting and Night mode. The Realme X features this camera as well as other devices from Realme manufacturers.

The ultra-wide camera has a range of about 119-degree and it’s the first-ever in a Realme smartphone. It has a pixelage of 8MP with an f/2.2 aperture. The 2MP macro camera with a large pixel size of 2.0µm and its focus is about 4cm away, so you can take stunning up-close shots. The fourth camera is the 2MP depth sensor, it assists in taking bokeh shots and helps finalize contrast in photos. The camera also offers AI-powered scene recognition, after a scene has been recognized then camera settings will be adjusted accordingly. The camera app offers three major shooting modes – Photo, Portrait, and Video – and you can switch between all of them when necessary.

The phone has a 16MP f/2.0 module as its selfie camera just like the Realme X with fixed focus. Once again, we get beautification options like skin smoothing, eye enlargement, and face thinning. Shots taken on the Pro look very lively with accurate blurring and less noise.

The Realme 5 Pro houses the Snapdragon 712 chipset – which beats out the 710 via higher clock speed on the processing cores. The graphics are powered by the Adreno 616 just like the Realme X and previous Realme 5 series members. However, the 712 sports the same ISP as the Snapdragon 845, and the AI engine is faster than the Snapdragon 710. The processor unit is fitted with copper foil, a graphite sheet, and aluminum for thermal conductivity.

The device is available in three memory variants- 4/64GB, 6/64GB, and 8/128GB. It makes use of UFS 2.1 storage which is faster than eMMC and speeds up loading times. However, the device limits the CPU and GPU performance when not running on High-Performance Mode. You must opt for this model from the Battery Settings if you won’t utilize the Realme 5 Pro full potential.

The Realme 5 Pro runs on a Li-Po 4,045mAh battery with an endurance rating of 100 hours. The phone offers VOOC 3.0 fast charging via the 20W charger that comes in-box and the USB-C cable needed for VOOC. As a result, the phone gets a full recharge after barely an hour and 30 minutes. Endurance and quick recharge is quite an enticing pair which the Realme 5 Pro offers.

The Realme 5 Pro certainly does not slack in the connectivity space as we get Wi-F, Hotspot, and the latest version of Bluetooth. Moreover, we have GPS capability via A-GPS, GLONASS, GALILEO, and BDS. Finally, we use the USB Type-C 2.0 and USB On-The-Go on the Realme 5 Pro.

The Realme 5 Pro is available for sale at local retail stores nationwide. It can also be found in online stores for purchase. The Realme X is being sold at a price of about NGN 72,000 and above.

The Realme 5 Pro comes as a great deal as it brings a lot to the table. From a great screen to durable hardware and commendable battery life. The Realme 5 Pro is definitely an all-rounder at such an affordable price. You should consider it if you’re looking for maximum value at a minimum price.

ABOUT US
Emsgadgets brings you information on techs, crazy smart home products, consumer gadgets, reviews, and prices of smartphones and laptops, including tips.
Contact us: emsgadgets1@gmail.com
FOLLOW US
© Emsgadgets | All rights reserved
Potus Trump NFT